It was in London, back in 2011, that our FSE events first began. These days, we find ourselves doing about one a year in London, usually every February. This year we wanted to return to the location we’d used in our very first FSE: the sprawling and popular MC Motors. It has so much to offer and we felt like we’d only touched the surface. 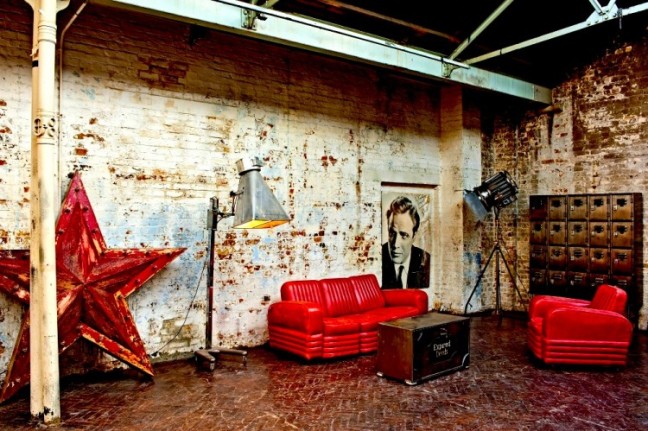 MC Motors is seen everywhere in magazines and TV – so popular these days that it commands a high price, so we hiked up the entrance price for this shoot. And then with our stylist Minna we decided on a theme: Circus Circus. We’d never done this theme before, it was different from our usual thing, yet flexible enough to accommodate everything from feminine to quirky and in between. It would go perfectly with the props littered round MC Motors, which included massive flashing letters and fairground toys, as well as plenty breathing space with simple, stripped back textured walls. Places sold out quick, and we were secure to start spending on styling. 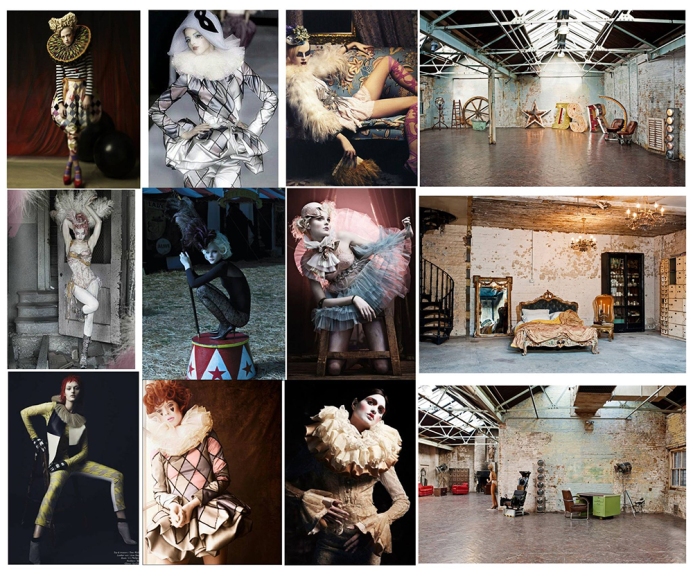 Above is our moodboard. On the right are images of MC Motors. On the left are various Pinterest visuals that ranged across 5 different identifiable Circus ‘types’: doll, clown, burlesque, pierrette and ringmaster.

We designated styling budget and hatched a plan for 5 different sources of styling: (1) theatre costumiers; (2) designer loans; (3) a on-set ‘guest’ designer with their styling assistance; (4) our own self commissioned outfits.

We looked carefully at the looks in the moodboard and the details that made up each outfit. The tights, the shoes, the fabrics, every little element that made up the whole look… what did we need to make something close to these looks? If we wanted to commission our own clothes, we had to get started on that as early as possible to give enough time.

In the moodboard above, the bottom left shows a woman in a catsuit, over which other elements are hung. So we decided a set of catsuits would be a good start for the styling stock. We sought out someone who could produce the catsuits. We licensed a set of Circusy-themed vector images from a stock site, textured them in Photoshop to give them an aged, stained look, and had them printed onto catsuits. These worked out very well in the shoot.

In addition to the catsuits we wanted to make our own Circus theme garments. So the next thing we did was to hunt out Circus-theme fabrics off ebay and other online sources: sequin-laden, diamond-patterned harlequin, and other assorted crazy styles. We purchased a set of dress patterns (that is, sewing instructions) from shops online, and supplied these to our seamstress Tina along with all the fabrics. Crazy baggy pants, a sequin-encrusted jacket, and sparkling loose pants. (Unfortunately in the end, several of these pieces weren’t quite right. They were too clown-Circusy; they needed an element of feminisation to work. This part of the styling was a gamble – but we can adapt them for another Circus shoot in the future.)

Once our self-designed stuff was all underway, we looked next to designers. Matt discovered a costume-making, burlesque dancer who both performs and styles: Talulah Blue, and asked if she’d come down to London to assist Minna in creating 2-3 looks with the models each day. This would contribute strongly to the ‘burlesque’ element of the circus theme, and with her many fine accessories, Talulah turned out to be a massive strength on the shoot.

We had a prolific Danish clothes designer long confirmed, though unfortunately it did not work out with timing for the shipping for this shoot, but we were thankful we had lots of other options. We sourced a set of crazy shoes from the ineffably bizarre Natacha Marro, and this was perfect for the Circus theme. Usually on our shoots we have so many voluminous long gowns that shoes are peripheral, but we knew the Circus shoot that shoes were massively important – colourful and sculptural and as good as we could get, so this was a coup.

Lastly, a portion of our budget was designated for theatre rental. We took a visit to the National Theatre with stylist Minna to see what Circusy stuff we could find, and were surprised to come out with a rather ample rail including feathery capes, weird waistjackets, ringmaster jackets, various ruffs, and ancient dilapidated corsets… Happy that our styling stock for this shoot was going to be reassuringly chocker, we’d spent the most ever on styling for a London FSE, meaning we weren’t going to see much profit but we’ve always been the type to go overboard…

We wanted to go crazy with hiring props too, but budget was at a limit, but at least we knew the location already had a selection of oversized quirky and glitzy props. I did, however, grab a ringmaster drum from the Theatre props department, and Matt purchased online huge red and white pieces of fabric that we could hang from the ceilings to provide extra Circus-esque shooting options.

The first on our model line-up was redhead Kim, flown in from Milan. Next we sought Sanna and Kristina, the blonde duo who modelled for us at Belvoir. Then we hooked out new models: Lucy Feng, smoky-eyed Asian model. Anne Winterburn with a quirky unique look we thought was perfect for Circus. Olivia, ‘cutesy’ brunette would be our 6th backup/bonus model for Saturday, and the bonus ‘model’ for Sunday would be AbnorMalik, mime artist performer whom I met through a tweet.

Tati Zarubova, our long-time FSE favourite was booked in for both days to do voluminous hair. Anne Veck was on board for one day, bringing some wigs. Dave Noble booked in for the other. We got Grace Gray and Morgan Defre on board to do makeup. Far from our usual requested simple ‘dewy’ makeup, we wanted all guns blazing with something crazier, from overblushed doll cheeks to sequined eyelids. We gave the HMUA team some prior guidance, and of course the moodboard, but they largely improvised to provide each outfit with an appropriate look.

Now to put it all together, and as I always say, make Matt’s months of planning worthwhile!

This FSE worked in traditional format: 2 photographers with 1 model for an hour, 5 hours total with lunch in the middle. I shot alone, with right-hand-man Tim, and Matt on hand when he was not helping someone else. Baby Lilith, who was 10 months old at this point and starting to crawl, would be either exploring the dirty floor or in a crew member’s arms transfixed by their necklaces. As always on an FSE, the mood is relaxed so there was plenty time for me to set up, think, try options, and then of course have Lilith latch on just as I was about to start shooting…

For all shoots I was working with my Nikon D810 and alternated between 24-70mm and 70-200mm lenses. I wanted to pump some ‘painterliness’ into the images afterwards, but this time I was not putting too much pressure on myself to get images with lots of space for Surreal Fashion composites. The outfits were so OTT they were ‘enough’, so perhaps instead I could concentrate on images for that ever-important part of one’s portfolio that attracts client work. 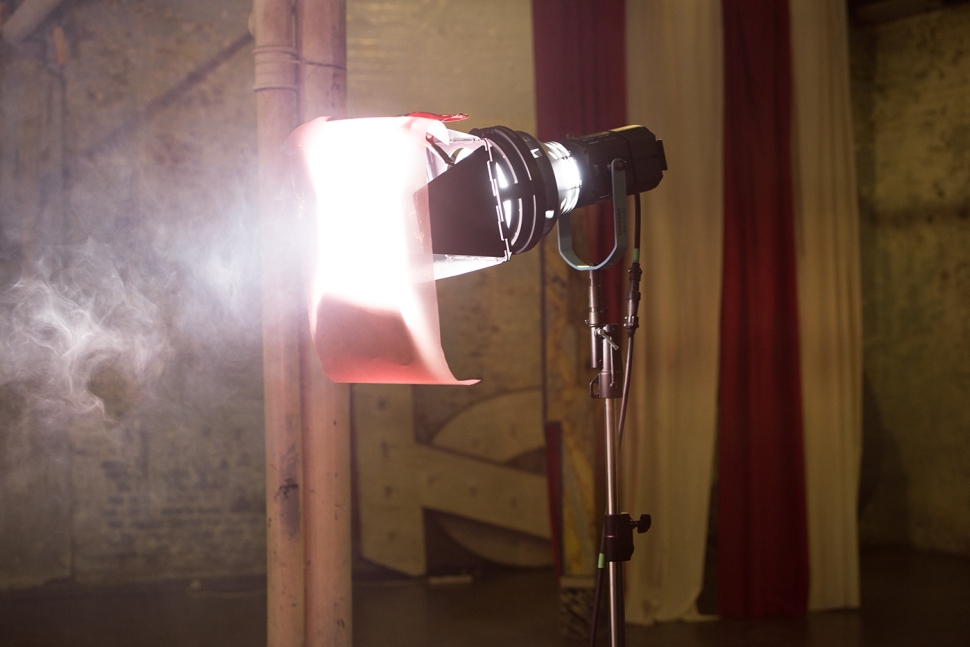 On this shoot in particular we had plenty of constant light and haze. Littered around the five sets were our Lupolux LEDs and HMIs, accompanied by another Broncolor HMI pumping out a moody ambience of stagecraft underneath the shuttered ceiling. At other times we opened up the shutters for natural light.

We had our Broncolor strobes, Move 1200L kits. And also, for the first time we were shooting with a Broncolor flooter – the largest fresnel spot of the broncolor line. It’s effectively a hybrid between a strobe and a HMI light. This has a large, variable light angle with a “homogeneous light distribution”, making it a versatile spot.  We situated the flooter into the main hall area.

We shot Kristina, below, in her ringmaster look, standing by our draped fabric ‘curtains’, lit by the flooter. By focusing the light it gave a perfect, moody look that I was able to manipulate further in Photoshop to enhance the cinematic appeal. A lighting diagram is unnecessary – it was simple, a flooter positioned in front of Kristina slightly off centre, no gels for this one.

In post, I played with exposure brushes to exaggerate the slightly ‘dappled’ light already in the image.  I wanted the final image to look almost poster-like, rich reds disappearing into background shadow, splashes of light bringing out the pop of her lips and glitter of her dark heels.

We pumped out haze with the HMIs, which picked up a sparkle of dust in the air, bringing an interesting in-camera texture to some shots, as below.

And then – shooting with bonus ‘model’, mime artist AbnorMalik was a special treat, especially as I don’t often give myself the chance to shoot men! I shot Malik with two models: first, Lucy, below, in the upstairs ‘bedroom’ set, and then with Kristina in the Broncolor flooter set-up, further below.

Now the set-up with the broncolor flooter, same as shooting The Ringmaster further above, but this time instead of moody low-key shots we adjusted the light to create high-key shots…

This blog post shows just some of my finished images, as there will be more to come, so be sure to follow my Instagram. I’ll finish with some more BTS! 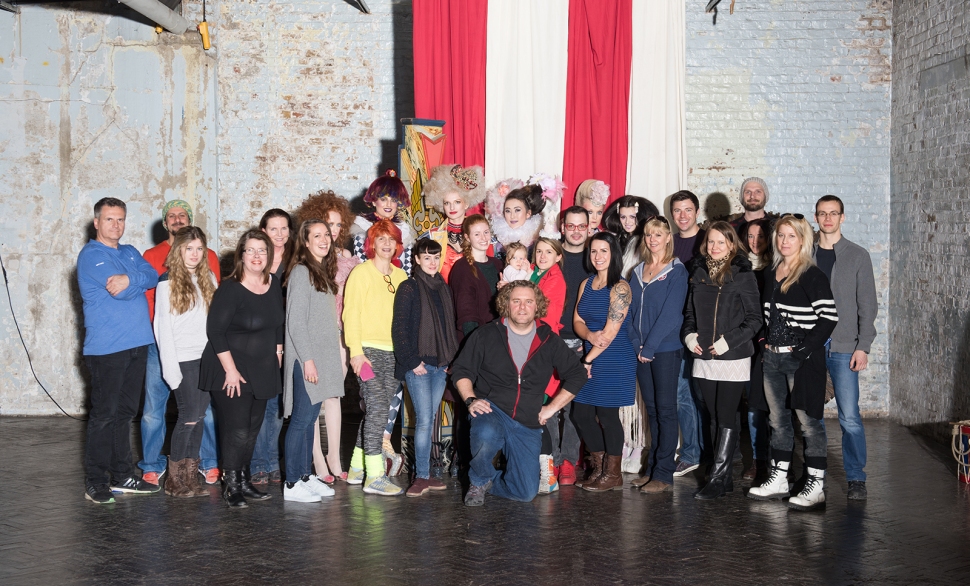 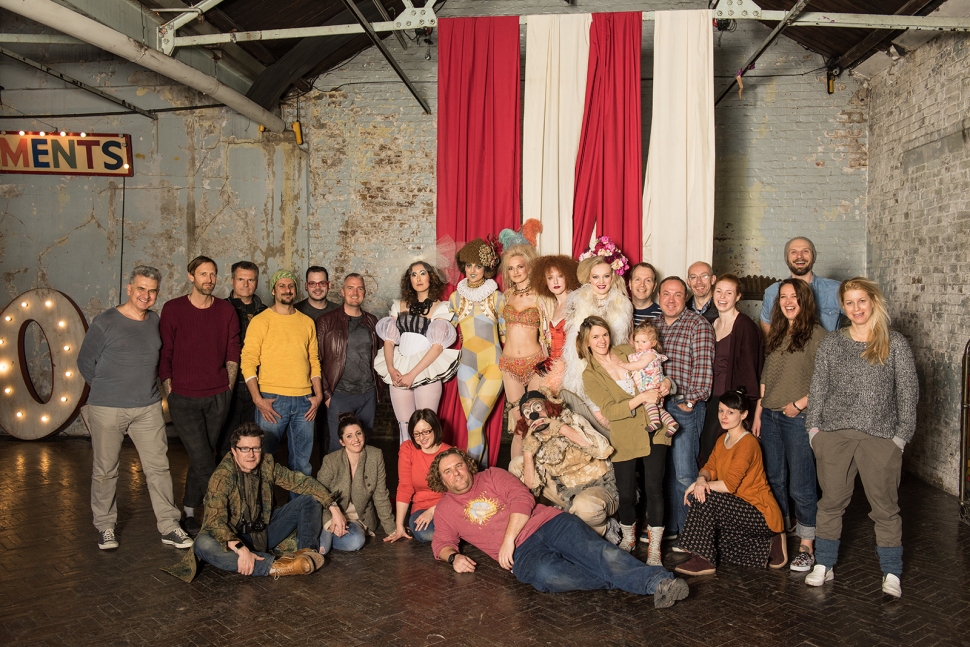 I’ll end with a fantastic picture by James Goodchild which was shared by Solis Magazine: